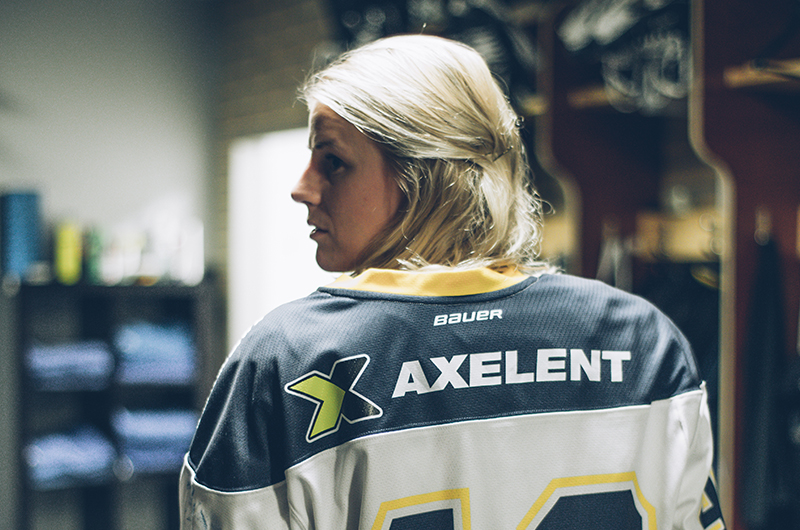 What made you start playing ice hockey?

“I tagged along when my two older brothers played. There was no women's ice hockey in Storå where I come from so I played with the lads until I was 20. I’m now 28 but still play with the lads now and then. Before joining HV71 I went to New Zealand with my partner (who plays ice hockey for HC Dalen). He had a trial there so I took the chance to play as well. I learned a lot from that.”

You have a fantastic track record and you've played in the national side in the World Championships and Olympic Games. How does that feel?

“It doesn't get much bigger than this. The Olympics especially because of all the other sports and athletes involved.”

You have two Olympic silver medals and have come third twice in the World Championships, can you live off your sport?

“I have a job at HV71 helping to develop the women's hockey team, so yes, you could say I live off my sport. But compared to the men there’s a massive difference. Sadly, very few women ice hockey players can live off their sport or talent.”

What's your next goal?

”At one time it was always about winning, and although I still have the same drive, my focus has changed over time. After ten World Championships and three Olympics I ask myself how far I could get. How can I best contribute to progressing women's hockey?

After two championships with Linköping my motivation dipped a bit, but HV71 have set their sights on winning the women's championships. Being part of that feels very inspiring. When you spend 15 out of 24 hours a day on the ice you do wonder at times what you’re actually doing.”

Is there room in your life for anything other than ice hockey?

“I have time over during the summer months when I like to travel and play golf. I also go back to my hometown to get some peace and quiet. When I was playing for Linköping HC I took the chance to train as a physiotherapist, which I haven't regretted.”

Does women’s ice hockey have a bright future do you think?

“Yes it does. At least I hope so. Women's ice hockey has progressed enormously in the past couple of years. We’ve become better and quicker. A spectator from three years ago would hardly recognise it. The USA has formed a national hockey league for women who can actually live off the game. I’d say that the Swedish league is the best in Europe, so it might not be that long before we can live off the game like the men.”

What does your future hold?
By that I mean when you’ve hung up your skates.

“I naturally find myself thinking about it now and then. Economy is a vital aspect, as is family life of course. Men ice hockey players can become dads and continue playing. This is much more difficult for women. I fetch inspiration from a teammate at HV71, one of the most experienced women players in the world. She's 43 and has three children. Last season she scored 37 points in 28 league games.”

Eat out or at home?
Home

Favourite place?
The forest and countryside

Hidden talent?
Oh. Difficult. Hmmm... It may not be a talent as such, but children are drawn to me. It just sort of clicks.